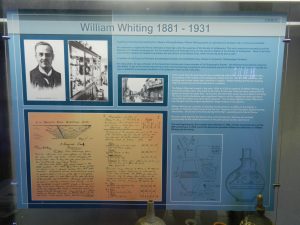 The current museum started with a Local Management Agreement in 1995, which was based on early beginnings in 1925! Local archaeologist and keen photographer William Whiting, who excavated an Ospringe Roman Cemetery, began raising funds for the display and permanent home for his finds at the Maison Dieu. Along with his brother John, he set up the original Trust to manage the museum which shared part of the Maison Dieu with Frier’s Bakery. The Whiting family undertook the changes necessary to make some of the Main Hall and larger Upper Chamber into a museum.
The impact of WW2 meant that the Trustees of the time struggled to raise funds for the upkeep of the building, and in 1946 it was put into the Guardianship of the State as represented by the Ministry of Works.
The museum underwent repairs and restoration and the Bakery moved to new premises nearby in Water Lane. The museum was in great demand for visitors so a Custodian was employed to keep it open. This eventually became financially unviable so the museum sadly closed.
English Heritage was formed in 1983 and took on the responsibilities of the Ministry. Following their review of the property during the late 1980’s, Arthur Percival and many well-remembered members of the Faversham Society Council took a major role in responding to an English Heritage “call to arms” to keep the museum and the collections it housed open to the public. A debt of honour for Faversham and Ospringe history which is to be commended.
A Local Management Agreement was signed between English Heritage and The Faversham Society in 1995 and once again visitors could enjoy this important site at weekends due to the efforts of the volunteers.
The Faversham Society Council – and particularly Arthur’s diligence to all matters of history – discovered that the original Trust had become dormant.

The Maison Dieu Museum Trust was formed (in the spirit of the original 1925 Trust) to manage the property and registered as a charity in its own right in 2002.